“The performances of the six-member cast are excellent… Greg Skura is always believable in situational absurdities, understanding the power of Cariani’s words and the truth they seek.”

“The professionalism of both the cast and the director shines through in the perfect comic timing on display in this briskly paced, slightly wacky play…” 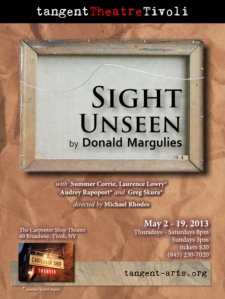 NORTHERN DUTCHESS NEWS:
“Magical…It’s an actors’ play…Greg Skura, playing Jonathan, has possibly the best hidden depths to his character…the result is clearly the dramatic production of the Hudson Valley season so far.”

THE GRASS IS GREENER

THE BERKSHIRES ADVOCATE WEEKLY:
“Greg Skura pulls off the American dash and splash sort of charm with great ease and ability…it is easy, in Skura’s hands, to see why the sophisticated ladies of the play find him so attractive…there is also a virility that seems to flow from him to whoever he is addressing.”

THE GLENS FALLS POST-STAR:
“…Skura is sure to be an audience favorite among favorites in this fine production.”

THE MANCHESTER JOURNAL:
“…his threat to the otherwise staid but content couple was real, and Skura convinced us with a slick undertow that screamed self interest.”

CURTAINUP:
“Michael Rhodes as Estragon and Greg Skura as Vladimir do a bravura job of remaining centered in their performances…”

THE IRISH ECHO:
“…a nicely paired Estragon and Vladimir in the secure and accomplished persons of, respectively, Michael Rhodes and Greg Skura. They are obviously comfortable in the routines, rendering them to strong comic effect and, when it’s required, a certain depth of feeling…”

THE COLUMBIA SPECTATOR:
“the most impressive aspect of Godot is the interplay between its two main characters, Estragon (played by Michael Rhodes) and Vladimir (Greg Skura)…one can immediately sense the unique chemistry that Rhodes and Skura have…Rhodes and Skura manage to bring to their characters a striking individuality…”

TALKIN’ BROADWAY:
“Skura’s deadpan delivery brings laughter from the audience. From that moment right through to the end of the play, he owns us. His natural, conversational performance sucks us right in.”

NYTHEATRE.COM:
“Greg Skura effortlessly plays Danny with humor and charm. You sympathize with him immediately…”

THE DARK SIDE OF THE MOON

OFF-OFF BROADWAY REVIEW:
“Robert Moulthrop’s The Dark Side of the Moon is the uncompromising story of parents who suffer the death of their young daughter, then struggle to find someone to blame for the horrible event. Barbara Helms, Michelle Fulves, and especially Greg Skura delivered powerful performances in a multi-layered drama that explored the facets of forgiveness, anger, and sorrow…”

NYTHEATRE.COM:
“Skura gives a superb performance as he blends the cynicism and pragmatism of [American Embassy Rep.] Miller…”

OFF-OFF BROADWAY REVIEW:
“…the incisive writing and talented ensemble brought empathy to the [characters], reminiscent of novels by Jay McInerney. Greg Skura was outstanding as the sensitive, conflicted Doug.”